A change of scenery is good. It stimulates the senses to be in unfamiliar surroundings.  I had the privilege this summer to get out of town and take a few small trips, so I thought I’d finally get around to sharing it with you.

My first trip this summer was to see friends in Kansas City.  My dear friend Terrin had been telling me for a while about the First Friday art walk in KC, and she had a good feeling it would be something I’d be into.  So, I finally made it happen –it was even better than I expected!

It was more like a block party than a gallery walk.  But this block party went for blocks and blocks and blocks. The galleries and streets were so crowded, many times we had to make a single-file line just to get through to the next place.  I’m not kidding, I’ve never seen so many people out for an art event.  They have a lot of good galleries there, all within walking distance, and the atmosphere was fun and casual, not like many of the pretentious gallery walks in Dallas.

For hours, we walked from one street to the next, popping into galleries and seeing a new band performing around every corner.  There was the first group of middle-aged performers, happily playing in the corner of a parking lot,  while a range of admirers danced to “you can be my bodyguard, and I can be your long lost pal…”  Later we were greeted by a slick rock band blaring from a more official-looking stage set up.  But probably my favorite was a group of spontaneous break dancers in the middle of the street.  Traffic was at a complete stop, and the dancers and the surrounding crowd could have cared less.  I was instantly in love with this eclectic mix of people, music and art. 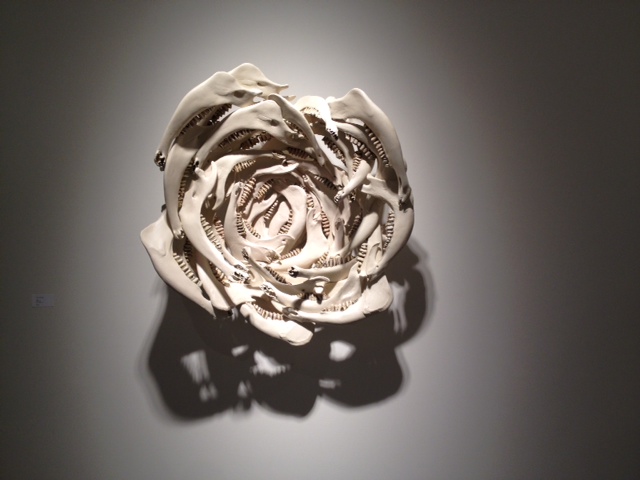 One of my favorite exhibits was by Judy Onofrio  at Sherry Leedy Contemporary.  My attraction to the sculptural work made up of bleached cow bones was a surprise to myself (and the friends that were with me).  Her ability to take jawbones, vertebrae and ribs and turn them into fascinating works of art was pretty exceptional.  Most of them were wall-hangings, but there were also some large vase-like structures that were very impressive.

I only snapped a couple of photos, but you can see more of her work at  http://www.judyonofrio.com.  And — lucky for me– the artist was actually there during the show!  I got to meet her and ask her about her process.   She told me she has a neighbor that raises cattle and allows her to collect old bones from his fields.

She said that she enjoys all the parts of collecting, cleaning,  and bleaching the bones before assembling them into sculptures.  Somehow, she has devised a method to conceal all of the joints where the bones are connected, and she told me that’s also a fun process for her.  (Thanks to Terrin for snapping a pic of me talking with Ms. Onofrio).

What a fantastic way to start the summer.  I’m eager to go back up to KC and do it again soon.